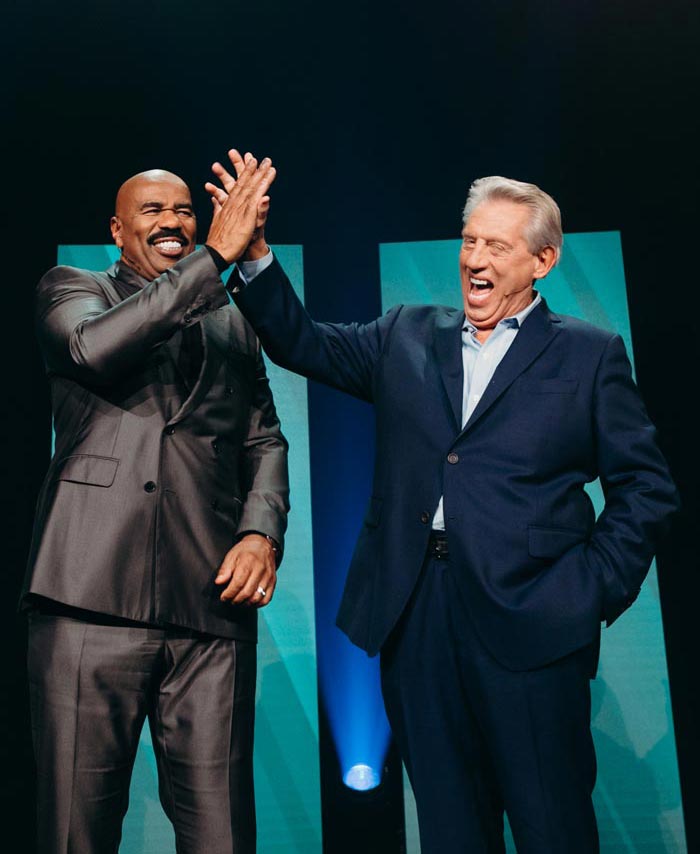 *DISC “Flight” Assessment- This assessment provides detailed instructions on how to fill the gaps in your life and business while taking them both to a new level.

Plus, you will also receive the following modules taught by Steve Harvey & John C. Maxwell:

Think About What the Audience Needs to Hear, Not What You Want to Say

If You Don't Connect, They Won't Listen

Get Creative or Get Off the Stage

Earn the Right to Stay on Stage 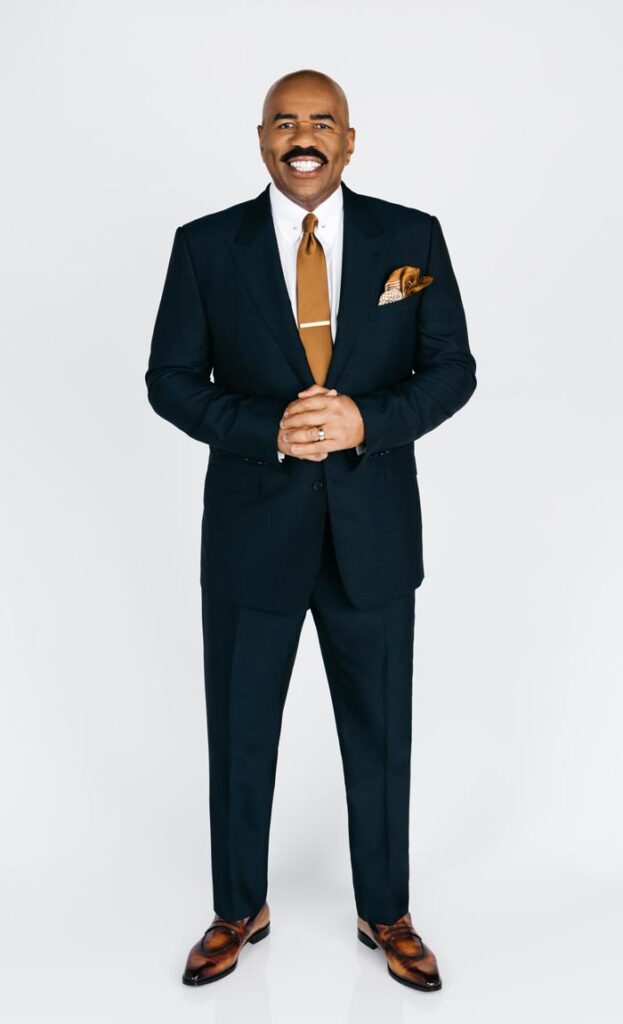 From a young age Steve Harvey knew that he wanted to be on TV. He held fast to his dream, against all odds for a stuttering African American boy in the 1960s. His unrelenting pursuit formed one of Harvey’s life philosophies: “You have to dream big and believe that you will succeed.”
Steve Harvey was born January 17, 1957, in Welch, West Virginia, as Broderick Stephen Harvey. He is the son of Jesse Harvey, a coal miner, and his wife, Eloise Vera Harvey, a Sunday school teacher. He grew up in Cleveland, Ohio, and remains a Cleveland man at heart. Steve’s family didn’t have much, but their lives were full with their faith. Before Harvey achieved his stardom, he made a promise to God that if he made it, he would thank Him and spread the word. Harvey honors that promise by thanking God at the end of every show and by sharing his gratitude with the audience.

Harvey’s entry into comedy was a leap of faith. He was encouraged to perform at an open mic comedy night in 1985. Harvey brought down the house, and the next day he quit his job to pursue his dream. As Harvey says, “You have to jump and take a leap of faith in order to soar.”
The road to success was not an easy one. It left Harvey homeless, living in his car and traveling the country for performances. In 1990, he won a national comedy competition which led to his big break on Showtime at the Apollo. From that moment on, Harvey’s career took off.
Today Steve Harvey remains known as the busiest man in Hollywood. But in addition to his work on screen, radio, stage and print, Harvey is a dedicated mentor and an inspiring motivator to his fans.

Harvey began his career doing stand-up comedy in the mid-1980s.
In 1997, he toured as one of the Kings of Comedy alongside Cedric the Entertainer, the late Bernie Mac and D.L. Hughley. The tour’s immediate success led to the taping of one of the most successful comedy specials in history — The Original Kings of Comedy.
In 2006, Harvey released the popular DVD Don’t Trip…He Ain’t Through With Me Yet. Due to the overwhelming demand, he released another comedy special on DVD in 2008, entitled Steve Harvey: Still Trippin’, to critical acclaim.
On August 2, 2012, Harvey performed his final stand-up act at the MGM Grand in Las Vegas, ending a 27-year career as a stand-up comedian. The two-hour performance was broadcast live on Pay-Per-View.

His stand-up success eventually led to an eight-year stint as host of Its Showtime at the Apollo, as well as to various entertainment roles including acting, hosting, writing, and producing. On TV, he starred in ABC’s Me and the Boys, The WB’s The Steve Harvey Show, and Steve Harvey’s Big Time Challenge. Harvey hit the big screen in movies such as Love Don’t Cost a Thing, You Got Served, Johnson Family Vacation, and Madea Goes to Jail.

From hosting Showtime at the Apollo, Harvey became a household name. In addition to Showtime at the Apollo, his hosting career includes The Steve Harvey Show, Family Feud, Celebrity Family Feud, Steve, Little Big Shots, Little Big Shots: Forever Young, Steve Harvey’sHYPERLINK “https://en.wikipedia.org/wiki/Steve_Harvey%27s_Funderdome” Funderdome, Miss Universe, New Year’s Eve with Steve Harvey, NFL Honors and numerous others. Harvey is one of the only hosts to appear on competing networks at the same time.

Harvey began hosting Family Feud in 2010. Under Harvey, the show achieved record-high ratings and became the first nationally syndicated TV series ever to increase its ratings for seven consecutive years. Harvey has surpassed original host Richard Dawson‘s tenure as the longest-serving host in Family Feud history.
In 2015, Harvey began hosting Miss Universe, which propelled his career internationally. In 2017, he also began hosting New Year’s Eve with Steve Harvey live on Fox.
In 2019, Steve Harvey announced that he was moving his eponymous daytime talk show to Facebook Watch. Steve on Watch, launched in January 2020 and continues to entertain audiences across the Facebook platform.
In 2021, Harvey announced his new courtroom comedy series for ABC. Harvey will welcome real-life people into his courtroom to rule on conflicts ranging from family disputes and sour friendships to actual small claims. The new series is set to air the first quarter of 2022.
Harvey is one of the most recognizable and sought-after celebrities in the world. His relatable, honest and inspiring personality has made him one of the most trusted personalities in media. 178,000,000 US viewers welcome Steve Harvey into their homes on a yearly basis—that’s over 55% of the total U.S. population.

In addition to his wide-ranging accomplishments as an entertainer, Harvey is also a best-selling author.
In 2009, he wrote Act Like a Lady, Think Like a Man: What Men Really Think About Love, Relationships, Intimacy, and Commitment. A New York Times best-seller, it inspired the 2012 movie Think Like a Man, in which he starred. In 2010, Straight Talk, No Chaser: How to Find, Keep, and Understand a Man was also a New York Times best-seller. Act Like a Success, Think Like a Success: Discovering Your Gift and the Way to Life’s Riches was released in 2014.
During the taping of Family Feud, Harvey opined about taking risks to realize your dream. His comments were taped and released. To his surprise, the video went viral and led to him penning his New York Times best-seller Jump in 2016.
Harvey is a prolific best-selling author whose books have been translated into 30 languages around the world.

Harvey is an active humanitarian and philanthropist. He and his wife, Marjorie, founded The Steve and Marjorie Harvey Foundation in 2010, which helps under resourced communities receive the tools for success. Through the foundation, they have launched several mentoring programs including The Steve Harvey Mentoring Program for Young Men and Girls Who Rule the World.
The Steve and Marjorie Harvey Foundation impacts thousands of families yearly through mentoring programs, education and financial assistance. In addition to their own foundation, Mr. and Mrs. Harvey dedicate time and resources to like-minded charities that further their cause. Visit Steve HYPERLINK “https://theharveyfoundation.org/”& HYPERLINK “https://theharveyfoundation.org/” Marjorie Harvey Foundation for further details.
Steve and Marjorie Harvey are devoted to their family of seven children and seven grandchildren, Mr. Harvey’s proudest accomplishment.
Enroll Now

“Anyone desiring to increase their influence, enhance their results, and improve their ability to communicate and connect needs this course. If you’re not interested in any of those things, get the course anyway – the entertainment value is worth the investment alone! There’s much more to a conversation than just words, more to a speech than just a thesis, an opening, three points, and a closing statement, and there is much more to communication than just channeling information. It’s about connecting with people, celebrating their value, helping them see their potential, and having them walk away better than you found them. Not only did Steve and John have that effect on me, but I walked away with the compelling belief – and the tools – to arouse an eager want in the people I communicate and connect with too.”
–Jason S.
“What a gift to sit and learn from two of the best communicators on the planet. Steve Harvey and John Maxwell on the same stage – pure MAGIC! And both come to the table with practical and applicable content that will help shape your communication skills for a successful and significant future. Buckle up and get ready to laugh, cry, dream, learn and change your future in communication for the best. This course is for anyone looking to grow in their communication skills – the wisdom and insight is life-changing!”
–Chad J.
"I couldn't agree more with what Steve and John said on really working for what you want to excel in doing! A lot of people forget that if we want to be good at something, it doesn't really happen overnight. There is work and time invested in it to reach a certain level of mastery."
–Kyla T.

John C. Maxwell is a No. 1 New York Times bestselling author, coach and speaker who has sold more than 24 million books in 50 languages. Often called the country’s No. 1 leadership authority, Maxwell was identified as the most popular leadership expert in the world by Inc. magazine in 2014. And he has been voted the top leadership professional six years in a row on LeadershipGurus.net.
He is the founder of The John Maxwell Company, The John Maxwell Team and EQUIP, a nonprofit organization that has trained more than 5 million leaders in 180 countries. Each year Maxwell speaks to Fortune 500 companies, presidents of nations and many of the world’s top business leaders.
After growing up in Michigan, Maxwell attended Ohio Christian University and then received a Master of Divinity and Doctor of Ministry. He was a pastor for more than 30 years before devoting himself full time to speaking and writing.
Three of Maxwell’s books — “The 21 Irrefutable Laws of Leadership,” “Developing the Leader Within You” and “The 21 Indispensable Qualities of a Leader” — have each sold over 1 million copies. Other notable books by Maxwell include:
Maxwell’s leadership philosophy is: “Everything rises and falls on leadership.”
According to his website, he says: “With so much hinging upon this philosophy, I’ve made it my life’s passion to develop leaders at all levels. I believe in you and the power of your influence to create a legacy within your sphere of influence that will leave behind an army of leaders who get the importance of strong leadership.”

For more information, visit JohnMaxwell.com and follow him at Twitter.com/ HYPERLINK “http://twitter.com/JohnCMaxwell”JohnCMaxwell. 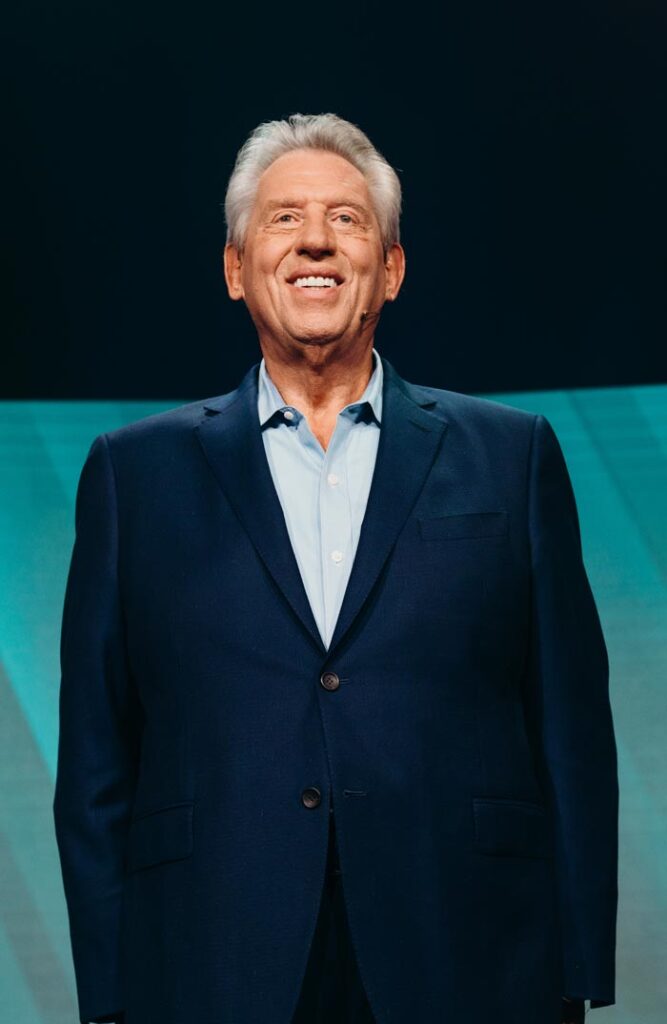